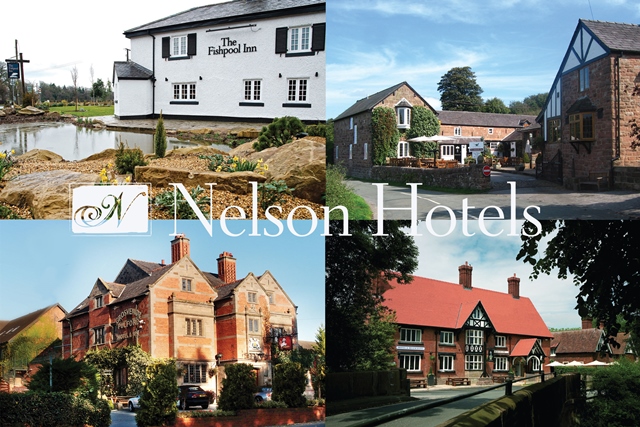 One of Cheshire’s leading hospitality groups, Nelson Hotels, has been named in London Stock Exchange’s list of 1,000 Companies to Inspire Britain. The family-owned group is being celebrated as one of the fastest-growing and most dynamic small to medium sized businesses in the UK.

Nelson Hotels owns and operates four of Cheshire’s most prestigious award-winning venues, including The Grosvenor Pulford Hotel & Spa, The Fishpool Inn, The Pheasant Inn and The Bear’s Paw. Each establishment has its own individual style and is proud to provide a high quality service for local clientele and residents alike.

Only companies reporting a consistent revenue growth for at least three years, whilst considerably outperforming their peers, are considered for the 1,000 Companies to Inspire Britain list. 75% of the companies featured in this list were from outside London, with 86 companies included from the North West. Leading politicians and executives of the London Stock Exchange consider this list to demonstrate the drive, vision and dedication of Britain’s business leaders and entrepreneurs, as they continue to promote employment opportunities and economic growth in the UK.

Much of Nelson Hotels’ recent growth is attributed to its acquisition of The Fishpool Inn in Delamere. Within a year of it opening, the Inn was hailed the Best New Pub in the UK at the national 2014 Publican Awards. It was also crowned Best Tourism Pub at the annual Marketing Cheshire Awards.

Having been listed as a business to inspire Britain, Nelson Hotel’s operations director, Andrew Nelson said: “Nelson Hotels is committed to excellence and everyone within the group is encouraged and supported to deliver a first-class experience for every customer. We aim to offer an exceptional service with a genuine warmth and hospitality within comfortable and pleasing surroundings. We believe this approach has driven our rapid growth and success in recent years. We are absolutely thrilled to have made it on to such a prestigious and nationally-recognised list, which is testament to the outstanding effort of our dedicated team and continued support of our highly valued customers. As the economy continues to stabilise, I’m extremely honoured that Nelson Hotels is considered an inspiration to other businesses throughout the UK.”