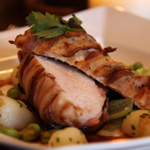 Three Nelson (NorthWest) Hotels restaurants have been recognised as among the best in the county.

Under the new Taste Cheshire accreditation scheme, Ciro’s Brasserie at the Grosvenor Pulford Hotel & Spa, the Bear’s Paw and the Pheasant Inn have all been rated “Highest Quality Assured”, which is the highest rating available.

Ciro’s Brasserie, which serves modern European and Mediterranean cuisine, was praised for its stylish and well maintained interior and friendly management. It received a rating of 87%.

The Bear’s Paw, a five-star gastro inn in the village of Warmingham, re-opened last year with 14 boutique rooms following a £2m restoration project. It has gone on to become a firm favourite with locals and tourists alike.

Taste Cheshire gave the restaurant a rating of 84% and was impressed by the use of locally sourced produce.

The Pheasant Inn, which enjoys some of the best views in the county from its spot in the Peckforton Hills, was rated 85%.

Assessors highlighted its stunning position and well presented exterior, in addition to the menu which boasts dishes including local Delamere asparagus, vine tomato and red onion tart with baked goats cheese and raspberry brulee with shortbread.

Harold Nelson, director of Nelson (NorthWest) Hotels, said: “These ratings are testament to the hard work of our team. I am pleased the assessors have recognised the efforts we make in providing outstanding hospitality across all of our venues.”

The Taste Cheshire quality assessment scheme is owned by VisitBritain and operated by Quality in Tourism, VisitBritain’s assessing body.

The scheme focuses on eating establishments of any type or size and the assessment is carried out annually.