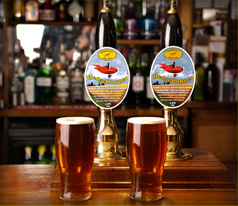 The Mobberley Fine Ales brewery is housed on a working farm in Mobberley. Set in the heart of the Cheshire countryside, it provides an idyllic location in which to produce high quality craft beers, using the sole ingredients of malted barley, wheat, hops and yeast.

The team have been brewing since the summer of 2011 and their aim is to produce beers of a consistently high quality, with a broad range of tastes and styles. All of their beers are brewed using their own original and unique recipes.

“Our philosophy with our first beer, HedgeHopper, was to produce a beer extremely well rather than rushing into making several beers at once.”

The initial and continued success of HedgeHopper, certainly provided them with a great foundation to build upon. In October 2011, to satisfy growing demand, they started brewing their second beer, WhirlyBird. This pale amber ale again proved to be a huge success with all customers. Then in March 2012, they introduced another beer to complement their existing range, RoadRunner, this too has more than proved itself in popularity alongside its two sibling beers.

In addition to their core beers, every two months Mobberley Fine Ales introduce two new seasonal beers to their range, ensuring a wide variety of ales are offered to their valued customers. This includes their annual festive delight!

“We are already looking forward to Christmas, and have begun preparing our special Christmas seasonal beer. It will be a deep ruby ale, packed full of flavour, with a unique combination of malts and hops delivering a subtle fruity aftertaste.”

All of their beers are now featured regularly in many pubs across Cheshire, Derbyshire, Staffordshire, Shropshire, Manchester and North Wales and through a network of beer wholesalers. The beers can be also be found in pubs as far afield as Scotland and London, as well as featuring at dozens of beer festivals throughout the year.

The brewery also supply direct to functions such as weddings, corporate events and private parties.

HedgeHopper (ABV 3.8%) is a golden ale with a rather fuller body than its ABV suggests. It’s a “proper bitter” with a hint of hops and a very pleasant aftertaste.

RoadRunner (ABV 3.8%) is a light pale ale, smooth and refreshing with a sweet, delicate hop aroma.

WhirlyBird (ABV 4.0%) is a sweet and full bodied pale amber ale. It has well balanced flavours, sweeter to the taste with a mellow citrus fruitiness to finish.

Revelation (ABV 2.6%) is another of our current seasonal beers. It’s a pale golden ale, with fruity hop notes, and a powerful body despite its ABV.

The RoadRunner and WhirlyBird ales will be featuring first on our taps, followed by the classic HedgeHopper!

Our inn is now closed following Cheshire’s movement into Tier 4 from Thursday 31st December. You can view all details of tiers and guidance here.

If you require accommodation for essential travel, our head property Grosvenor Pulford Hotel & Spa is operating on a limited basis for this purpose.

If your query is not answered by our FAQ or is of a more urgent nature, please email our central reservations office at our head property via reservations@grosvenorpulfordhotel.co.uk but please explain that your query is relating to The Bear’s Paw. We kindly ask that you allow up to 5 days for a response whilst we operate with a very limited team during these unprecedented times.

Please be aware that our reopening is subject to a revision of our area’s tier status, and we will update our guests as soon as we are permitted to reopen.

We hope all of our guests are able to stay safe and positive as we experience this most difficult period together, and look forward to seeing you all soon.