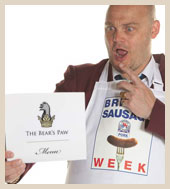 Two of Nelson Hotels’ Cheshire based gastro inns; The Pheasant Inn and The Bear’s Paw already celebrated for their wholesome locally sourced produce, are joining in on the activities and have opened polls on their Facebook sites for fans to vote for their favourite banger. The winning combinations will be added to the menu for a special limited time over British Sausage Week.

Furthermore, The Pheasant Inn is sending their Head Chef Paul Prescott off for a sausage master class with local North West butchery favourite H.Greaves & Sons based in Wigan, where he will be creating his very own homemade Cumberland and Pork & Leek sausage varieties for The Pheasant Inn customers to enjoy. He explains;

“The importance of using locally sourced produce in our dishes is paramount. We are thrilled to be joining in with British Sausage Week, as it raises awareness of using Red Tractor Pork throughout the UK”

Investing time and trust in local producers such as H.Greaves & Sons has rewarded the Inn with an array of sensational customer reviews over the years and the team are delighted to be working with them again for such a fun and interesting project.

Alongside this, The Bear’s Paw is hosting a Create a Sausage and Win! competition, where entrants are invited to think of their favourite flavour combinations before posting suggestions on the Facebook page before Friday 19th October, where the winning taste infusion will appear on the menu alongside the winning poll choices during British Sausage Week. The winner will also enjoy a Sausage Dinner for two at The Bear’s Paw which will of course feature the winning entry.

Both the customers and staff at The Bear’s Paw and Pheasant Inn are hotly anticipating the activities involved in this year’s British Sausage Week and are looking forward to marking the start of this chilly winter season with some warming comfort food.