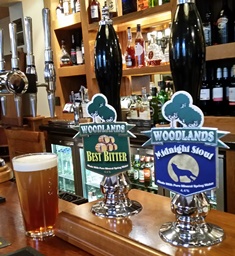 Woodlands Brewing Company are a small microbrewery based in Stapeley, on the outskirts of Nantwich in Cheshire. The company was established in 2004 when John and his son Peter discovered a natural water spring in a peat field on the land they had recently acquired – an occurence in England which is very unique!

John, a keen amateur home brewer in his earlier years, had the water tested and realised very quickly that it would make great beer. Without hesitation he contacted a local brewer and they agreed to do a trial brew using the mineral water from the spring, along with one of John’s old recipes. It was through this, that the first ever brew of Woodlands Bitter was made!

The beer became an instant selling success and John hoped to strike a deal with the brewery to continue producing the beer, only to find that the brewer was actually looking to sell up! After just a few seconds of thought, John shook hands to buy the brewery and thus Woodlands Brewery was born!

Since 2004, Woodland’s Brewery have gone from strength to strength, acquiring two pubs, moving to premises almost twice the size of the original brewery and picking up numerous awards on the way. Their latest awards include CAMRA Champion Beer of Cheshire for 2014 and Gold and Silver in the SIBA Regional 2014 awards. Woodlands Brewery pride themselves on making their beer as natural as possible, a task simplified by their ready made water supply. All of their beers are brewed with natural spring water, barley, hops and a small amount of natural finings, meaning there are no nasty chemicals, preservatives or additives included.

They now have around 13 beers permanently in stock, along with a range of bottle conditioned beers.

A selection of Woodlands Ales will be available on pump at the Bear’s Paw over the coming month.

Our inn is now closed following Cheshire’s movement into Tier 4 from Thursday 31st December. You can view all details of tiers and guidance here.

If you require accommodation for essential travel, our head property Grosvenor Pulford Hotel & Spa is operating on a limited basis for this purpose.

If your query is not answered by our FAQ or is of a more urgent nature, please email our central reservations office at our head property via reservations@grosvenorpulfordhotel.co.uk but please explain that your query is relating to The Bear’s Paw. We kindly ask that you allow up to 5 days for a response whilst we operate with a very limited team during these unprecedented times.

Please be aware that our reopening is subject to a revision of our area’s tier status, and we will update our guests as soon as we are permitted to reopen.

We hope all of our guests are able to stay safe and positive as we experience this most difficult period together, and look forward to seeing you all soon.